Nothing is as powerful as an idea, which time has come
Victor Hugo

After three years of development, we are very proud to present our prototype flying wing, which is already undergoing flight testing – the Horten HX-2.
This aircraft is a highly modern economical two-seat tailless light aircraft without a fuselage. It will be displayed in public for the first time at the air show in Friedrichshafen.
Due to its low aerodynamic resistance, the flying wing flies farther and faster than a comparable aircraft with a fuselage. The design of the airframe makes it easily adaptable for installing new propulsion technologies we anticipate will become available in the future.

We are planning further developments, such as unmanned or multi-seat versions of the current prototype. The HX-2 was built at our headquarters at Kindel Airfield (EDGE) near Eisenach.

The first designs for flying wings were made at the beginning of the 20th century. In 1910, Hugo Junkers received a patent for his work on flying wings. Our company name honors the visionary aircraft designer Dr. Ing. Reimar Horten (1915-1994). He is regarded as a pioneer in the field of flying wings and made the most significant contributions to the development of the forerunner prototypes, the PUL-9 and PUL-10.

Data of the Horten HX-2 prototype

FURTHER FEATURES
2 seats (side by side)
ballistic recovery system 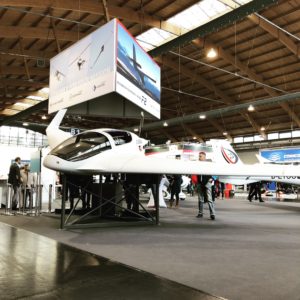